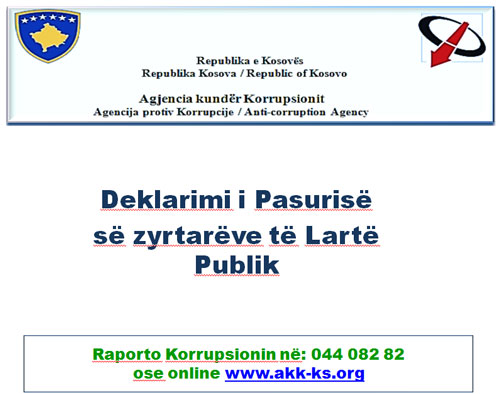 MORE THAN 95 PERCENT OF SENIOR PUBLIC OFFICIALS HAVE DECLARED PROPERTY

PRISHTINA, 16 JUNE 2011 - More than 95 percent of senior public officials have declared their property to the Anti-Corruption Agency, within the deadline which is determined by the Law on Declaration, Origin and Control of Property and Gifts.
Pursuant to this law, the number of senior public officials who have had the obligation to declare their property to the Anti-Corruption Agency was 1830. From this total number legal obligation was met by 1746 or 95.40%. (Download unique table)
The number of those who have not declared the property is 84 officials or 4.60%, (Download the list as a document), while 26 other officials have declared their property but the form is actually not completed in conformity with law and standards and criteria determined by ACA. (Download the list as a document)
However, based on Article 16 of the law in question ACA is obliged to initiate offense proceedings for all (84) officials who have not declared the property.
As to the latter officials who have not completed the form according to the law, ACA requests them to do so within the 15-day period otherwise it is obliged to initiate against them offense proceedings.