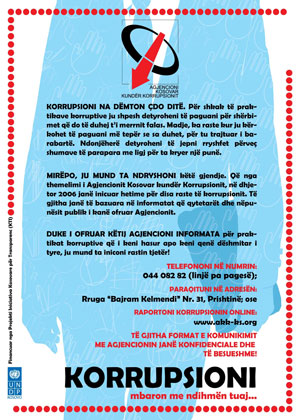 In the first phase the posters will be distributed through the facilities of the municipalities of Kosovo and will be located in places where the largest attendance of people is, i.e. where different documentation is obtained.

Posters entered in the frame, contain encouraging calls for citizens to report possible cases of corruption, if they are forced to pay bribes except amounts determined by law for various administrative services.

Director of Kosovo Anti-Corruption Agency, Mr. Hasan Preteni said that - "The Agency does this activity because we believe that the posters will be a good reflection for the citizens. In these posters citizens have all the details on how to contact the Agency if the civil administration officials oblige them to pay bribes or something else as a reward for performing any work that should be done according to legal norms. The text has educational content and we hope in public awareness on the must to report any suspected case of corruption".

Kosovo Anti-Corruption Agency, added Mr. Preteni, is determined to use all legal means to prevent and combat corruption. - "In a way also these posters are a tool of this war," finished Mr. Preteni.

The first posters were placed today in Mitrovica municipal facilities, Skenderaj, Vushtrri, Obilic and Gllogoc. In the days to follow, the posters will be distributed through other Kosovo municipalities as well as in several Ministries and independent institutions.

This Agency project is financially supported by the UNDP Kosovo Transparency Initiative Project.