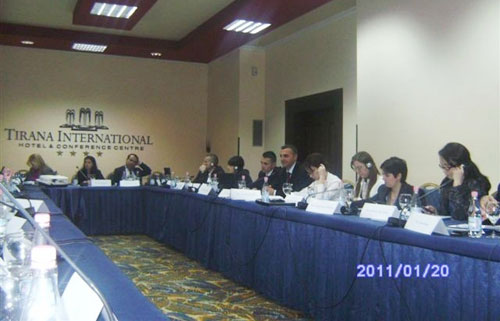 ANTI-CORRUPTION AGENCY PARTICIPATES IN REGIONAL CONFERENCE IN TIRANA, ON: "MEASURES IN PREVENTION OF CONFLICT OF INTEREST"

Organized by the Regional Anti-Corruption Initiative (RAI) and hosted by HIDAA from Albania, in Tirana International Hotel, from 20 to 21 January 2011 was held the Regional Conference on: "Measures in Prevention of Conflict of Interest".
Among the participants from the relevant state institutions of Croatia, Bosnia Herzegovina, Bulgaria, Romania, Moldova, Serbia, Montenegro, Macedonia, Catalonia (Spain), Albania, were the representatives of the Kosovo Anti-Corruption Agency.
Conference was opened by Inspector General of HIDAA Adriatic Llalla, and representative of the RAI, Edmond Dunga. Present was Mrs. Sonila Kadare who was also a panel member, Head of the Oversight Commission of the work of Independent Agencies in the Assembly of Albania. In this conference was made the presentation of all institutions one by one from all countries participating in the conference. Also, ACA officials made a presentation on the work of the ACA done by the Kosovo Anti-Corruption Agency officials.