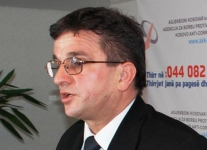 PRISHTINA, 9 December 2008 - Ninth December is designated by the United Nations as International Anti-Corruption Day and, of course, all democratic countries around the globe are marking this day in various forms.

Marking of this day not only in Kosovo but also in the international arena has no long history, being marked since 2003. Kosovo marks this day since 2006, when the Anti-Corruption Agency was established.

Thus, there are four years since we as an institution and as a society, on this date, with full capacity reiterate our concern about the level of corruption in the country and also call for a greater battle for a culture and spirit of the best management of public money.

We are very happy that these changes are positive. As never before Kosovo society is demonstrating signs of intolerance towards this destructive phenomenon. This is because it is deeply understood that the presence of this phenomenon has become the biggest obstacle to development and progress of the country in general. As a result, the public money extortion for personal gain undermines the rule of law and may jeopardize safety, undermine economic development, suffocate transparency, motivating culture of theft, while severely damaging the image of the country.

But corruption should not be seen as hermetically protected. Here this phenomenon is the result of personal actions or even of a particular group, motivated by greed. This means that this phenomenon may be hammered without any fear of consequences.

Surely the results will be very good!

Additional optimism comes from the fact that Kosovo has now issued the Strategy and Action Plan against corruption, these documents which have given many tasks to all sectors, both public and private, to meet them.

It remains that each institution and sector demonstrate its sincere commitment to fulfilling the duties committed in the Strategy and Action Plan.

The feeling of good success story at the end of 2011 seems to be anticipated!

Today is a nice opportunity for me to convey our cordial gratitude to all those people who demonstrated their civic courage to cooperate with the Anti-Corruption Agency, which provided a valuable contribution to our efforts to strengthening the law.

The battle against corruption is crucial for Kosovo society. Throughout this year we have not stood by idly, but we are not prone to complacency, since there is a long daunting road ahead of us.

Therefore, we must face with determination and fight evil, what impoverishes our lives, what prevents our aspirations to join Euro-Atlantic structures, what destroys our future - and that is corruption.

In this respect we all have a part to play our civic and institutional role.

On the International Anti-Corruption Day it is worth that we all make a promise: The promise that there will be regular tendering procedures; there will be objectivity and fairness in the selection of economic operators as tender bidders, that there will be no bribe taken or given and there will be transparency and personal and institutional integrity.

The realization of these promises will make Kosovo a sincere society and will increase the chances for progress, better environment and life for our children.

(The author is director of the Kosovo Anti-Corruption Agency)