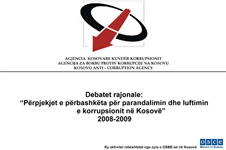 PRISHTINA, 27 AUGUST 2009 - The Kosovo Anti-Corruption Agency held today, 3 September 2009 in the municipality of Rahovec a public debate, marking the resumption of the third cycle of the project "Joint efforts to combat and prevent corruption in Kosovo”.

Debates conceived as a kind of campaign that have as focus group municipal civil servants gathered more than 35 civil servants in the municipality, even the mayor Mr. Qazim Qeska, representatives from public companies, civil society and media.

Director of ACA Mr. Hasan Preteni talking about the phenomenon of corruption, said that this phenomenon is bad and harmful for Kosovo society and must be fought and eliminated.

"Today I have come here to discuss with you as civil servants and representatives of other organizations, in order to encourage you to become a common part of ACA to fight this destructive phenomenon".

In the debate was said that municipality has taken some administrative measures which have an awareness character and encourage citizens to report corruption if they encounter such elements.

"Joint efforts to combat and prevent corruption" is a project of the ACA which is strongly supported by the OSCE Mission in Kosovo and is intended to increase the general civic awareness in the fight against corruption.

This project was started in October of 2008, and until now such debates were held in 20 municipalities in Kosovo.

The next debate will be held on 03 September 2009 in Malisheva.