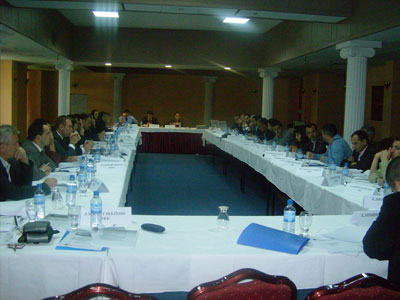 PRISHTINA, 11 MAY 2009 - The Kosovo Anti-Corruption Agency is almost finalizing the anti-corruption action plan. A two day workshop which was held on 8 and 9 May in Struga, Macedonia, attracted more than 45 representatives from government institutions, independent agencies, public prosecutor and civil society and media to provide the last inputs to the preparatory draft of this plan which will start being implemented in early June this year.

The process of drafting the anti-corruption action plan began in December 2008 also with a two-day workshop which was held in Suhareka, while many meetings continued the process of sectoral groups in Prishtina.

This document, which contains anti-corruption measures for each state as well as private sector aims to promote to maximum the energy of Kosovo in the elimination of acts of corruption, extent of which seems to be disturbing.

Anti-Corruption Action Plan will be implemented when the Kosovo Assembly approves the national strategy against corruption, which is expected to do be done during the month of May 2009. Kosovo Anti-Corruption Agency, which is in charge of the process of drafting this plan, will also have responsibility to monitor the implementation by all mechanisms of each sector.

In this context, each sector institutions are obliged to report to the ACA at least once in four months, while the ACA will report to the Assembly of Kosovo.