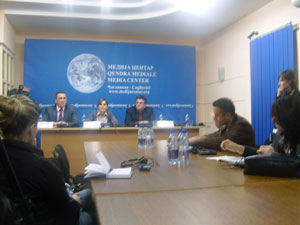 MR. PRETENI EXPRESSES OPTIMISM THAT FIGHT AGAINST CORRUPTION WILL SUCCEED

PRISHTINA 26 January 2008 - Director of Anti-Corruption Agency Hasan Preteni expressed optimism that in 2009 Kosovo will mark success in the fight against corruption.

Mr. Preteni made these comments during a debate organized by the Media Centre in Caglavica on "Corruption in Kosovo”.

Asked by reporters which Kosovo institutions are more inclined to corruption, Mr. Preteni referring to the work of the Agency report for the first six months of 2008, said: - "in June last year ACA published a report of the six-month work. By that time the concerns of citizens who also have reported suspected cases of corruption have been the judiciary, public enterprises, Government and local government". For now, he added – we cannot even talk about an institution as we have to wait for the next few weeks when the work report of the ACA for the year 2008 will be published.

Mr. Preteni encouraged everyone to focus all their energies and activities in the fight against corruption, since it is known that this phenomenon is present in Kosovo.

ACA, he said, would engage maximally to be a barrier against corruption, and its work will lead to completion of the legislation, combating and preventing corruption.

Participants in the debate were Minister for Returns and Communities in the Government of the Republic of Kosovo Nenad Rasic and Merita Mustafa from Kosovo Democratic Institute (KDI).