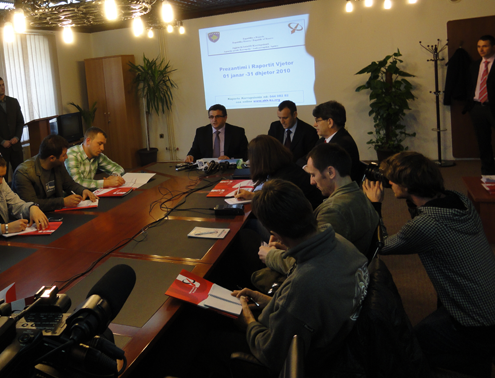 ACA PUBLISHED ITS ANNUAL REPORT FOR 2010

Prishtina, 24 March 2011 - Anti-Corruption Agency today published its annual work report. The report reflects one-year work of the ACA for the period 1 January to 31 December 2010. In this report are included performed activities undertaken by the ACA during this period which are presented in sections that are covered by each department.

Agency Director Mr. Hasan Preteni during the conference with journalists expressed concern that corruption in Kosovo is not being combated properly. "As I have stated before I reiterate that Kosovo is not fighting enough the corruption", he said. Furthermore, Mr. Preteni added that ACA during the reporting year has noticed the total value of damage caused to the Kosovo budget by corruption acts is supposed to be about 10 million euro, while the number of persons suspected of being involved in corruptive actions is 101.
The final report of one-year work of ACA can be found on the official web site www.akk-ks.org more exactly under the section of Reports.