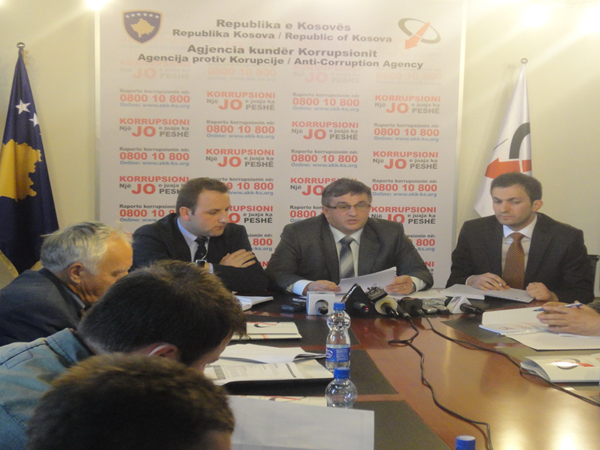 Prishtina, 28 March 2012 - Anti-Corruption Agency published today the annual report on its performance where it appears that public enterprises are the most corrupt institutions in Kosovo.

Director of ACA Hasan Preteni, at a press conference where he presented the report also said that during 2011 the most frequent cases dealt with on corruption in Kosovar institutions were the ones against public enterprises, particularly in the area of ​​procurement.

During 2011 the Agency has handled 160 cases of corruption, where from the total number of cases 60 belong to the category of public enterprises, followed by local government with 56 cases, the Government of Kosovo with 30 cases, courts with 11 cases and the prosecutors with 3 cases.

The procedure of preliminary investigations conducted by the Agency has resulted in the reporting of 121 senior public officials to Kosovo prosecutors. Institutional positions of the persons suspected of corruption are:

Director of ACA Mr. Preteni said that during 2011 the public has not hesitated to report the corrupted, but their trials continue to be a problem that cannot be overcome.

ACA has also proceeded during the reporting period 5 cases to competent administrative authorities with a request to initiate disciplinary proceedings against 7 officials of the institutions of Republic of Kosovo.